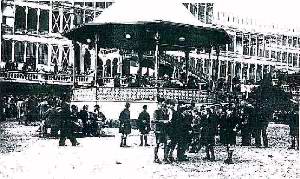 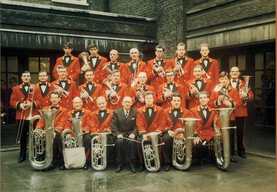 Crystal Palace Band in the 1960's
After the Second World War the band's fortunes gradually declined as membership dwindled. At one time in the 1970's there were only a handful of players left, but the band kept going with the determined efforts of a few die-hards Today there are over 30 playing members in the main band with a thriving 'Progress Band' as well. The band's resurgence in fortunes can be measured by their extensive summer bandstand programme under the enthusiastic musical direction of ﻿﻿Michael Gray. ﻿﻿This reflects the relatively low turnover of players, and the popularity of the annual band trips!

In 1996 the band received an extra boost after being awarded lottery funding from the Arts Council for England which, together with its own funds, enabled the purchase of a whole new set of band instruments. Further internal investment in the band has followed since then with the acquisition of new timpani in 2003, new banners in 2001 and new uniforms in 1997 which means that the band not only sounds the part but looks the part too!

CPB has performed at numerous venues over the years including Royal Parks, seaside bandstands, concert halls, carnivals, shows, BBC Radio and has even recorded a soundtrack for a film. The band has also made numerous successful trips to Europe including concerts in Belgium. Holland, Germany, France and Switzerland.

In the band's centenary year (2001) over £1,800 was raised for St Christopher's Hospice via two concerts at St John's Church, Penge and a Gala Centenary Concert at Ravensbourne School in Bromley (concert review). The Band has continued to support the Hospice for most of the years since and the total raised is now over £10,000.

For the future, the band is looking forward to improving musical performances, further contest successes and continued involvement with the local area. One particular aim will be to find and acquire a permanent rehearsal room for the band so that it can continue to provide musical entertainment.