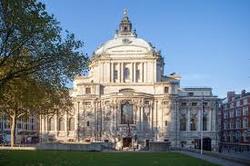 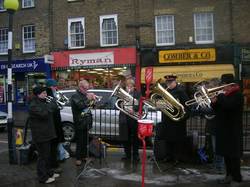 The Gala Concert may have been cancelled but members from the Progress Band spent their afternoon playing carols with the Salvation Army in Blackheath Town Centre. After two hours of carolling the band was joined by the local community choir, the Police then closed the road and as the sun set the Christmas lights were switched on.

On behalf of Capt Byrne, Progress Band MD Chris has been asked to pass on his thanks for helping to raise £485 towards the salvation army¹s work in Lewisham!
Switzerland Band Trip - Lenzburg - End August 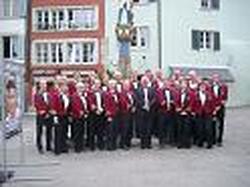 A fabulous holiday!
Many thanks to The Lenzburg Council, the Lengnau Band and the Zetzwil Band for hosting our three concerts and giving us such a warm welcome.
Thanks also to Max Suter, Marcus Killer and Clare Suter for making all the local arrangements which ran so smoothly.
Pictures from various cameras on the News Pictures 2010 tab
Sam Henderson's Wedding - 31st July 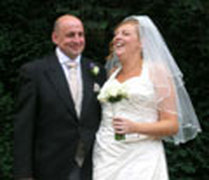 Congratulations to Sam & Tim who got married on 31 July.
Sam plays flugel horn in the Progress Band and as a sign of true love, Tim has is now learning to play the tuba and will join the Progress Band Brass Academy in September
Clare and Simon's Wedding - 18th July 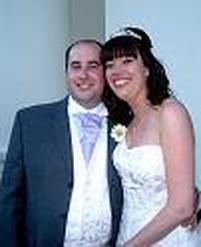 Thanks to Band members Clare and Simon for inviting us to play at their evening wedding party. It was held at a delightful venue in glorious summer sunshine. A wonderful occasion and we wish you both every happiness for the future.
Many of the guests were musicians, so we swopped seats around during the concert.
Have a look at a few pictures from Andrew Lipscombe and Maggie Stallybrass plus a few more evening shots from your webmaster.
And view an 'amateur' video of the Band playing 'When I'm 64'!
Stars from the Progress Band 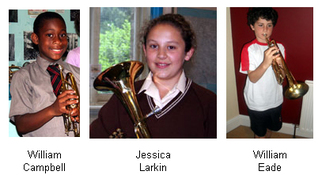 William Campbell, aged 9 years, has won a place at the Royal Academy of Music to study on Saturdays.
For his audition William played Sonata No4 in D Major and Bolera, both on the violin, followed by Sonata No 3 on the piano.
William, known to his school friends as ‘Mini Mozart’, is a lively young lad and loves music. His Mum tells us that he practices at 5.30am and he is even composing music.

Jessica Larkin, aged 12 years, has made her Grandma, Margaret Larkin (Progress Band Secretary and fellow horn player) so proud by getting Distinction in her Grade 4 horn examination with 92%. Her study was a piece called Latin Lady. The examination also included music theory, scales, and pieces called 'Sunset Strip' and 'To a Wild Rose'. Jessica commented "This has inspired me to aim for Grade 5 next year. I love my horn!"
William Eade, affectionately known as William 2nd by band members,.is doing fantastically well at the new Progress Band Academy and has just passed his Grade 2 music exam on the trumpet.
Congratulations to all.