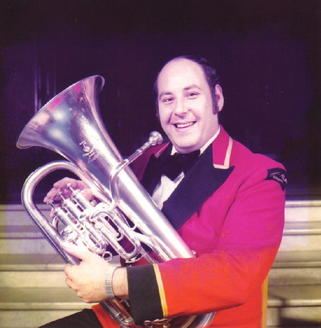 Roger's musical career began when he played percussion in a Boys Brigade Drum & Fife Band which his father and uncle taught in. However, at the tender age of 10 he joined the Crystal Palace Band on Second Baritone. John Hinckley was Roger's tutor in the band and despite a lack of "formal" training, Roger progressed throughout the band, graduating to Solo Euphonium in 1982. Since then, Roger has played alongside many conductors - his first being Charles Sheriff, but most noticeably James Watson and Derek Greenwood.

Roger counts 'rising to the dizzy heights of Chairman' as his greatest achievement in the band. But this was no mean feat. In the 70s the band's membership dwindled to a few players and it was only thanks to the dedication of people like Roger that it remains to this day. However, his dedication paid off, and the band played on. Roger is also the Representative of Southern England for the Federation of Brass Bands, and was recently elected onto the SCABA Executive Committee. He also organises the annual Band Trip, the highlight of the Band's year!

Roger's favourite contest venue is Symphony Hall in Birmingham, but says that his most memorable contest was the year that CPB won the Second Section SCABA contest at Folkestone with "Henry The Fifth". However, his favourite contest piece is the 'Carnival Romaine' by Berlioz, and is proud to own a copy of the euphonium part autographed by Trevor Groome, his boyhood hero.

Of his 45 years in the band, Roger's proudest moment is the Gala Centenary Concert, held in October 2001 to celebrate Crystal Palace Band's 100th anniversary. At the concert a cheque for £1,500 was presented to St Christopher's Hospice (based in South London), a culmination of the band's fundraising efforts throughout the year. It is largely because of his commitment and enthusiasm (and his wife Janet's patience!) that the Band continues - Roger Clements, we salute you!