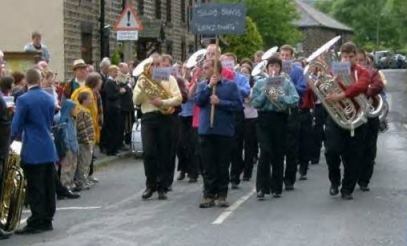 SLOB-bing it at the Whit Friday’s

On 4th June a group of CPB players, along with some of Brass Band Imperial Lenzburg from Switzerland joined forces to form a scratch band called SLOB (South London and Overseas Brass). Joined by some die-hard northerners (mainly from Swinton & District Excelsior Band) we all played at the famous Whit Friday marching contests at Saddleworth Moor near Manchester.

Setting off at 9 in the morning from London, and picking up the northern contingent at Birch Services, we arrived at Scouthead to play our first march around 4.30. Dressed in the brightest shirts we could possibly find (and some of them were REALLY bright!) we marched through the streets to ‘True & Trusty’ before playing Lenzburg (written for BBI) in band formation. And even though the band had never played together before, it sounded pretty good! After Scouthead we played at Delph and Dobcross, before moving on to Greenfield.

At Greenfield things took a slightly different turn. With the success of playing going to our heads (and possibly the beer as well!) we started playing ‘Lenzburg’ as it was originally written – with a Swiss folk song being sung in the middle section! It went down a storm with the crowds, and so we repeated the singing at Denshaw, where it also went down a storm with the adjudicator, who placed SLOB a fantastic 17th out of 56 bands – a tremendous result!

A few beers and sandwiches later, and it was time to head home – dropping off the northerners again on the way – and getting back to London at 5.30 on Saturday morning … all ready to play at Crystal Palace Park that afternoon!

The whole day was a fantastic success. SLOB were placed 45/68 at Scouthead, 29/74 at Delph, 17/49 at Dobcross, 38/64 at Greenfields and 17/56 at Denshaw. For a scratch band with only one practice at a service station on the M62 these are amazing results, and we were generally placed among 1st Section Bands, and on a few occasions were placed much higher than Championship Section Bands! And as well as musical success, there is now a firm friendship between CPB and BBI (and SDEB too!)…

… and there are definite plans to SLOB it again next year – so watch this space and book your space for the Whit Friday’s 2005!